Sri Pada, which is also known as Adam’s Peak is a popular attraction and an important site of worship in the country. It is a conical mountain which has a height of 2,243 meters.

The mysterious indent found at the zenith of this mountain is what makes it so special. A large number of Buddhists believe that it is the footprint of Lord Buddha..

The Portuguese believed that the footprint belonged to Adam. Hence the name Adam’s Peak was given to the mountain. Muslims also believe this to be true. A 14th century Persian poet has said that Allah created the incredible spices and flowers of Sri Lanka in order to help Adam transition easily from life in heaven to life on earth.

Portuguese also believed that the footprint belonged to St. Thomas, the eunuch of Candace and even the Queen of Sheba. Hindus believe that this footprint belongs to Lord Shiva.

As you can imagine, this incredible site is an immensely popular among a large number of people belonging to different faiths. It can be said that the Sri Pada is one of the most venerated mountains in Sri Lanka.

Adam’s Peak is located in the southern part of the Central Highlands. It lies in the borders of Ratnapura and Nuwara Eliya districts. The mountain is surrounded by a thick forest cover. In these forests magnificent beasts like elephants and leopards roam.  There aren’t any high mountains in the vicinity too. This makes Adam’s Peak quite prominent.

The conical mountain can be seen from many parts of the island on clear days. 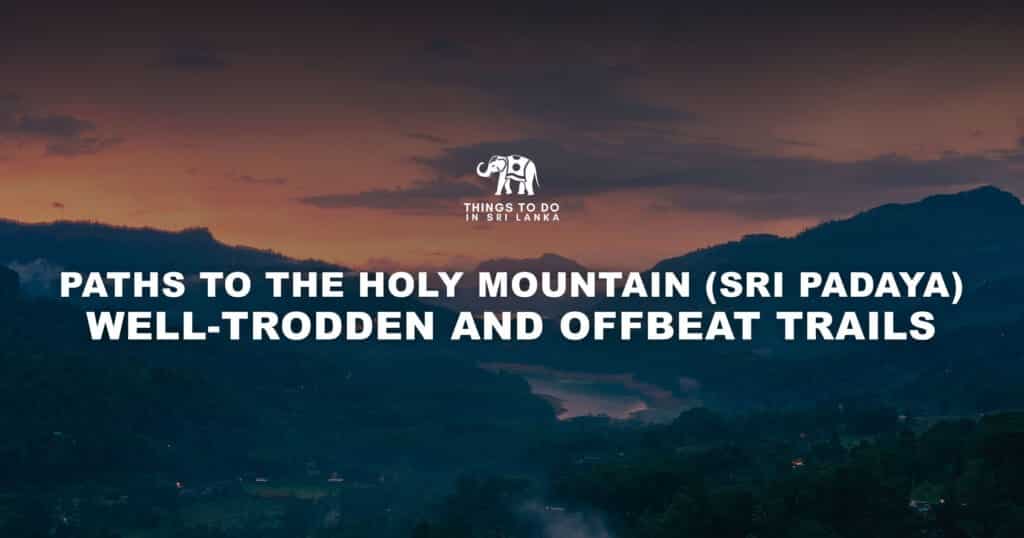 The weather and climate here in Knuckles can be rather volatile and unpredictable. A sunny day could turn out to be a gloomy one in minutes. Thick mists can also engulf the mountain range very quickly, posing dangers to trekkers and hikers. So it is quite important to enjoy the trek with a seasoned guide. Researching about the climactic conditions and weather patterns here is also a great idea.

Quite a number of devotees ascend the mountain in the night hoping to catch a glimpse of the incredible glory of the sunrise. Indeed, the experience of watching the sunrise from the zenith of this mountain is quite enthralling. As the first illuminating rays of the day touch the peaks of the distant mountains the hearts of all onlookers are filled with awe. Then the golden light spreads gradually throughout the landscape lending rich colour and beauty to the region. Indeed, this magical experience will remain etched in your memory for a very long time!

Many devotees ascend the mountain in the night hoping to make it to the top by daybreak. The climb is by no means an easy one! In certain parts of the trail the steps become quite steep. But still, young and the old alike make it to the top with strong determination. The pilgrims often sing devotional songs as they climb. This makes the journey a little easier for sure. As all pilgrims echo the word ‘Sadhu’ as the devotional songs are sung, the cold mountain winds vibrate with beautiful energy.

There are many electric lights illuminating the path to assist the climbers nowadays. This is a great initiative as many climb the mountain in the night. Back in the day there used to be simple torches placed at intervals along the way. Worn out climbers can find rest in the many ‘madam’s which are located along the way too. Some even opt to spend the night in one of these places of rest.

Sama Chatiya, which is also known as World Peace Pagoda was built by a prominent Japanese Buddhist monk named Ven Nichi Fuji. It was built back in the year 1976. The site is maintained by a number of Japanese Buddhist monks. The beautiful white stupa here is quite charming to behold indeed. It stands brilliantly against the deep blue skies, filling the hearts of devotees with deep and sincere admiration.

As it was mentioned earlier, the climb to the top can be quite challenging. So one should ensure that the visit is made at the right time. The best time to visit Adam’s Peak is between the months of December and April. This is the dry season so the climb will be rather pleasant and safe. This is the period which precedes the southeast monsoon season.

How to get there- The Trails

There are 6 trails which can be used to reach the top of Sri Pada. They are Ratnapura-Palabaddala, Hatton-Nallathanni, Kuruwita-Erathna, Murraywatte, Mookuwatte and Malimboda. The most popular trail is the Nallathanni and Palabaddala route. Most often than not, pilgrims ascend via Hatton and descend via Ratnapura. The Hatton trail is known to be the steepest, but it is also considerably shorter than the other trails.

The greater part of the trail consists of steps so come prepared to do some serious climbing!

More Details : Paths to the Holy mountain (Sri Padaya) | Things To Do In Sri Lanka.

You should try to enjoy this experience with a group of people. This will make it easier for you to enjoy the journey for sure. Of course, each person has to be enthusiastic about the challenge too, because if they aren’t you will find it very hard to motivate them half way through the journey.

You should also pack a lot of warm clothes as the mountain breezes can be quite chilly at the top. Pack extra clothes in a bag so you will be able to add on layers if you start feeling too cold. Be sure to wear sweaters and scarves as you make the ascent.

Try to bring a long a first aid kit with you as well. There can be cuts and bruises as well as headaches. Needless to say you will have to treat your aching joints from time to time too! Be sure to bring along some pain killers and pain relieving ointments so you will be able to make the climb without a hassle.

Needless to say you have to give yourself a good night’s rest before you start the ascent. Have a good meal before you go but don’t eat too much and stuff yourself too! Do wear comfortable clothes and shoes as you will not be able to enjoy the journey if you don’t. Keep in mind that the area is home to large numbers of leeches. So be prepared for little attacks! Make sure you pace out your climb too. If you climb too fast or too slow, you will not be able to enjoy a comfortable journey to the top.