As you must’ve heard already, travel pros in Lonely Planet released their ultimate lists of Best in Travel 2019 recently.

They have ranked top countries, top cities, top regions and best value destinations so that you travelaholics would be kept busy all the year around.

We are overjoyed to say they have ranked Sri Lanka as the top country to visit in 2019. Yay!

“Already notable to intrepid travellers for its mix of religions and cultures, its timeless temples, its rich and accessible wildlife, its growing surf scene and its people who defy all odds by their welcome and friendliness after decades of civil conflict, this is a country revived.”

Although there are some controversies related to these rankings, we too believe from what we see around the island that it is becoming more and more tourist friendly.

New highways, railroads are being built to reach critical areas of the country. More and more international hospitality brands are developing properties around the island.

We were super excited to hear the news. And to honor the awesome people in Lonely Planet, we decided to expand on best things to do in Sri Lanka as they’ve mentioned in the below video.

When it comes to beach destinations in Sri Lanka, Tangalle is a bit of a low-key. Although it is trending gradually as many discerning travelers choose it over busy beaches like Unawatuna or Weligama.

The sleepy town of Tangalle is located in the middle of the southern province of Sri Lanka. If you’re traveling by a hired car, it’ll take around 3-4 hours to reach there from Colombo (190km).

The shoreline stretches for several kilometers either side of the town. If you need to choose, opt for the eastern side which offers less rocky beaches, more accommodation and dining options.

Medaketiya and Medilla to the east of Tangalle have golden sand beaches lined with palms. Farther towards the east, you’ll find Marakolliya beach backed by mangrove-fringed Rekawa lagoon.

To the west, beaches are quite rocky. Famous shores around this area are Goyambokka and Godellawela (Silent Beach).

2. The train ride from Kandy to Ella

Don’t miss this folks. It is as beautiful as advertised. The trains traveling from Colombo to Badulla pass lush tea covered misty hills, untouched forests adorned by ice-cold streams and waterfalls.

Words don’t do justice so I suggest you watch this clip.

The best part of the train ride is between Nanuoya (Close to Nuwara Eliya) and Ella. If you have a strict schedule, you can ride only this stretch.

As Lonely Planet has mentioned in their video, reserving seats of these trains are not easy as they are in high demand.

But the doors of the trains are not closed so if you can stay by a door, you’ll able to bask in these gorgeous views.

To check out train schedules and prices, check out Seat61 website. Also, the online schedule published by Sri Lanka Railways is available.

3. The ancient ruins of Anuradhapura

Anuradhapura (A’pura) was the ancient capital of Sri Lanka for more than a millennium (377 BC to 1017 AD). During this period Buddhism was introduced and flourished to its peak.

Kings were so devoted to empowering the Island by Buddhist philosophy and culture they built massive stupas and vast temple complexes. (Read More)

To support agriculture, they built tanks and canals. The precision with which these had been built still amazes modern engineers.

Some of the key attractions in Anuradhapura

Pay a visit to this ancient city and embrace it is age-old glories. A’Pura can be very crowded on May-June and school holiday periods (April, August and December) so it’s better to avoid these mini-seasons.

Kandy is your gateway to the hill country. The sacred temple of tooth houses the tooth relic of the Lord Buddha. The temple complex is the most visited attraction in Sri Lanka.

Kandy Esala Perahera is held annually in every August showcasing the cultural extravaganzas.

The city has been around for several hundred years and evolved into a touristy city in late years. A modest man-made lake adorns the city surrounded by old cloud wall.

Apart from the temple complex, there are several natural attractions in the area. Some 05 km away from the city lies Peradeniya Botanical garden. It is the largest and oldest botanical garden in the country.

Some other notable attractions are Udawatte Kele sanctuary, Bahirawakanda statue, Hakgala mountain range. Check out our in-depth guide to Kandy for more information.

Surfing and Nightlife are what Arugam Bay is famous for. It is known for the best waves in Sri Lanka. Surfing enthusiasts and pros flock to various points from April to October to catch a decent break.

You don’t need to be a pro to surf here.

Sri Lanka is one of the pioneering tea producing nations thanks to the British. Hills covered in lush green tea plants that are arranged in perfect sections are indeed picturesque.

There are tea factories that allow visitors to observe the process and taste a fresh cuppa.

I’ve listed a few tea plantations that allow visitors near main cities in the hill country for your ease.

This is one of the famous places to observe elephants in the wild. Udawalawe is situated in vast plains to the south of hill country.

Vegetation is spread across mostly flat dry lands hence it is easier to spot wildlife.

It is situated midway between southern beaches and the hill country so that you can easily make a stop for a safari.

The National park surrounds the Udawalawe Reservoir and it is said there are about 600 elephants roam the park. Apart from the elephants, there are Water buffaloes, macaque, langur monkeys, spotted/sambar deer and crocodiles.

They are fed bottled milk in the infant days and grass thereafter. After 05 years they are released into the wild.

It is without a doubt one of the most remarkable attractions in Sri Lanka. A fortress perched upon a massive flat rock towering a 200m above the vast plains. It was declared a UNESCO world heritage in 1987.

It was built as a fortification by the rebellious prince Kashyapa in 477 AD. This legendary palace as well as its creator, however, was short-lived. (Read More)

Visiting in early hours or late afternoon recommended. Climbing the exposed rock face in the searing heat in the midday is not easy. Also, try to avoid public holidays and Sundays.

Narrow and vertigo-inducing staircases that lead to the top can be heavily congested on those days.

The area around the base is home to the pleasure gardens and various remnants of monastic buildings.

Don’t forget to get a glimpse of lovely Sigiriya damsels and the mirror wall on the way to the top.

Many travelers also visit the nearby rock ‘Pidurangala’. It is located a couple of km to the north of the rock fortress.

There is a small temple located there at which point the trail to the top of the rock starts.

A half hour moderate climb will bring you to panoramic views of Sigiriya and vast plains all around.

9. In to the wild – Sinharaja Rain Forest

It is the largest untouched primary lowland rainforest in Sri Lanka. The biodiversity you’d see here is unmatched in anywhere on the island.

This forest reserve is located to the south west of central highlands spanning for 84 km2.

The reserve is sandwiched between Kalu River and Gin Ganga River hence there aren’t any lacking of streams and waterfalls in the forest made by tributaries of those rivers.

Did you know? Sinharaja is a UNESCO world heritage

You can explore this canopied jungle on foot with a guide, which is the best way to feel the serenity of this treasure trove of flora and fauna.

While it is rare to encounter larger mammals like leopards there are enough langur monkeys, giant squirrels, birds, butterflies, rare snakes and insects to be seen.

Oh and also, the majority of these species are endemic. According to the media, there are 2 elephants roaming in Sinharaja too.

There are 2 entrances, Kudawa entrance is the most used one and located north to the forest. Mederipitiya entrance is at the eastern fringe of the forest. Sinharaja forest is denser around this area.

10. Wander around in Galle Fort

Galle is a former Colonial fort and a harbor. It is one of the largest forts that was built by Portuguese and renovated/expanded by the Dutch and English. (Read More)

The area inside the fort still retains its former glories and charms with its narrow alleyways and colonial architecture.

There are many things to see in the Dutch Quarter (Fort). Here are just a few.

Best way to explore the Fort is to rent a bike or scooter and wander around. Treat yourself to local street foods and a fresh king coconut while you’re at it. Galle Fort is a unique experience you must have in Sri Lanka.

These brief intros are just to entice your interest. Check out our in-depth destination guides below. Happy Travels. 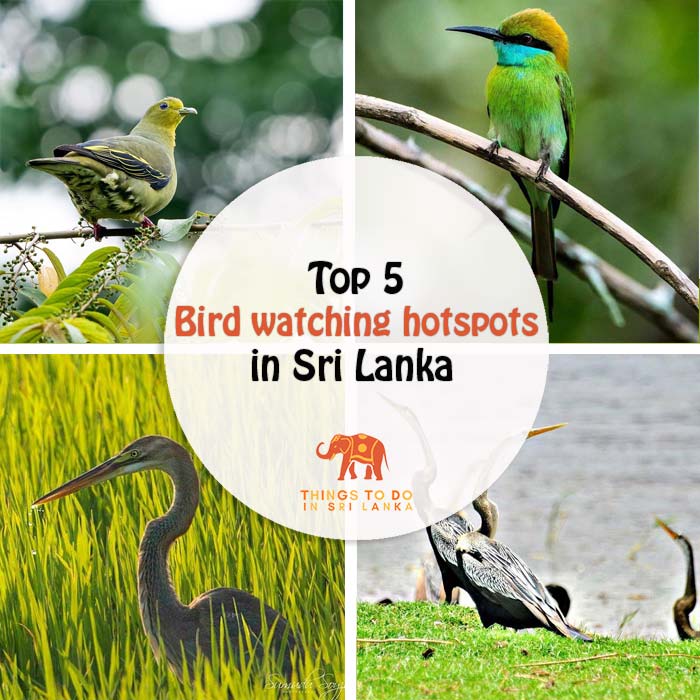 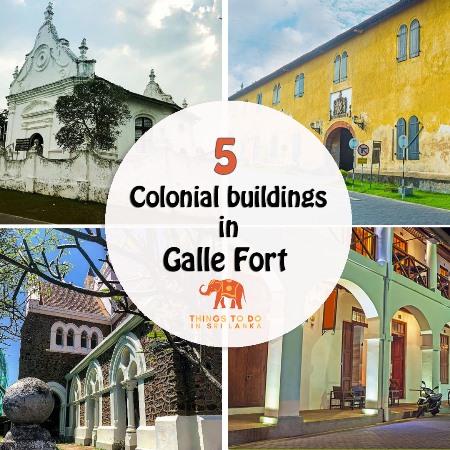